Russian police have detained a man suspected of starting a fire at a bar that killed at least 15 people after he reportedly fired a ‘flare gun’ on the dance floor.

The man was detained after the fire broke out at the ‘Poligon’ bar in Kostroma in the early hours of Saturday morning.

Police said at least 15 people were killed, and others injured.

Police have reportedly detained a 23-year-old married man named Stanislav Ionkin, 23, on suspicion of starting the fire with when he fired the flare gun.

Other reports described a fight which turned into a ‘mass brawl’.

Fire fighters fought through the early hours to put out the blaze at the bar around 300 kilometres (180 miles) northeast of Moscow. 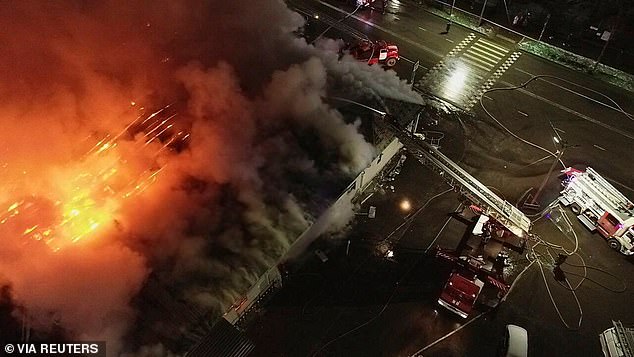 Russian firefighters work to extinguish a fire at the bar in Kostroma, Russia November 5, 2022 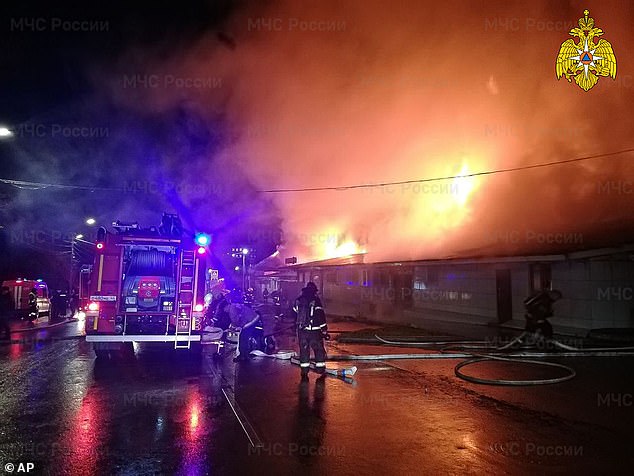 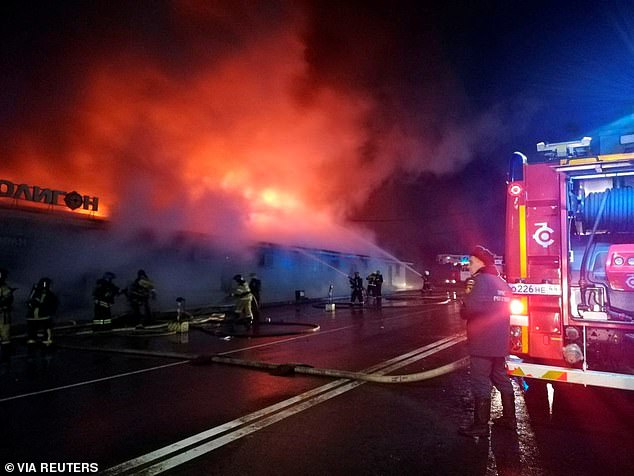 Authorities said the fire started at around 2.00 am local time and was put out around 7.30 am

‘Police officers identified and detained the suspect (behind) unlawful acts in an entertainment establishment in the city of Kostroma, which resulted in a fire and the death of people,’ Russian police said in a statement.

‘He has now been handed over to investigative authorities,’ it added, without providing any further details.

The motive for the incident was unclear.

As the inferno ripped through the Polygon club in Kostroma in the early hours of the morning, the fire caused the ceiling to collapse.

Some 60 suffered burns and other injuries in the fire which triggered panic among revellers.

Authorities said the fire started at around 2.00 am local time and was put out at around 7.30 am.

‘People were running out, just screaming and moaning,’ said one man in the club.

The governor of the Kostroma region, Sergei Sitnikov, earlier said 13 people were killed, but emergency services then said the remains of two other people were found. 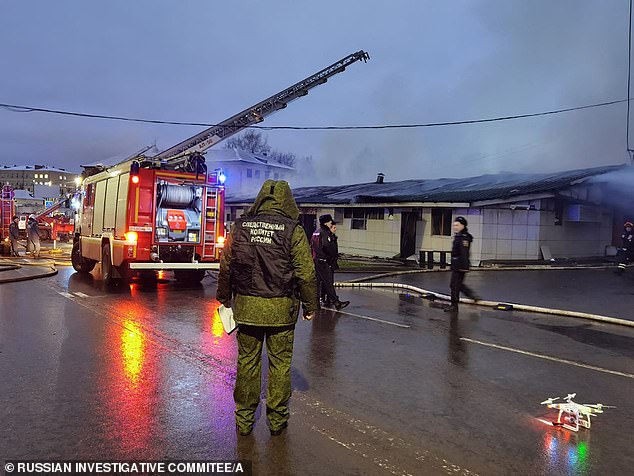 The fire erupted after a man fired a ‘flare gun’ on the dance floor, initial news reports said 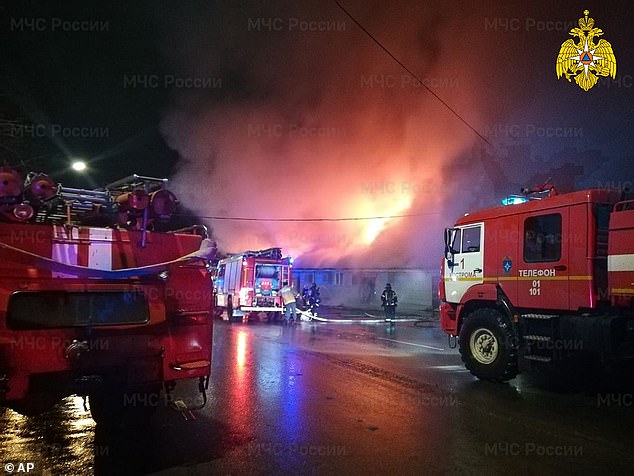 Housed in a single-story logistical centre, the bar erupted in flames in the early hours of Saturday morning 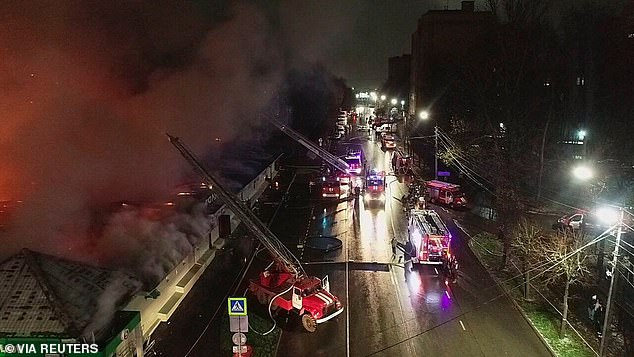 Local emergency services said the blaze had spread out over 3,500 square meters

‘He was spending time in the bar with a woman, ordered her flowers, with a flare gun in his hands,’ the source told the agency.

‘Then he went to the dance floor and fired it.’

The death toll was reportedly worse due to four fire doors being bolted. Fire-fighters had to use special cutting gear to break in to rescue people.

The club was owned by a local politician Ikhtiyar Mirzoyev, a member of United Russia, the main party backing Vladimir Putin.

Hero Andrei Kuzmin saved dozens of lives by kicking down a door to allow clubbers to escape. Around 250 people were evacuated from the building.

‘When the fight started they switched on the lights, there was a pop and there was instant smoke,’ said Kuzmin.

‘It was instantaneous. There was a clap, there was smoke, panic, smoke. The only thing I said was ‘calm down’. Then I went to kick down the door. I kicked the door open and people went out.

‘There were a lot of people in the place because it was very popular. I can’t say for sure, but at a rough guess there were about 300 people, because everything was packed, both the bar and the dance floor, and the tables were all taken. 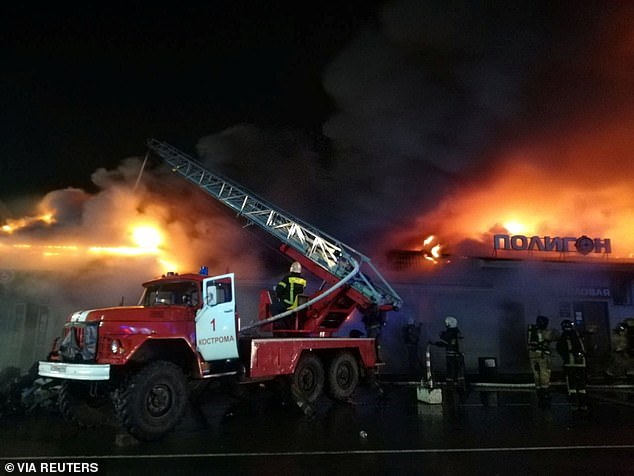 By day, it is a typical Russian ‘stolovaya’ – a casual restaurant serving traditional food 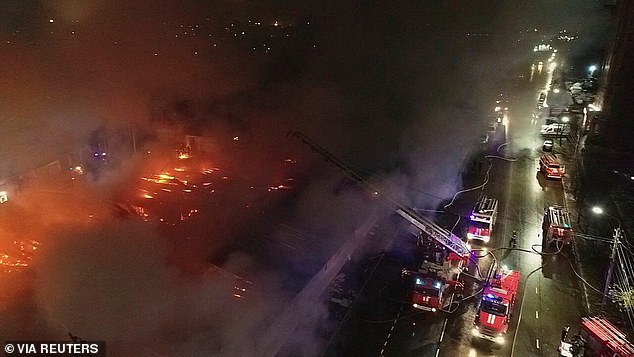 ‘I took it [the door] out and the crowd rushed through. If I hadn’t taken it out, it would have been terrible.

‘We went outside and seconds later there were clouds of smoke bursting through. People were running out, just screaming and moaning. ‘

A woman clubber said: ‘If it wasn’t for Andrei, we wouldn’t have survived.’

A woman named Yulia said: ‘The fight started initially, and the bouncers were pushing everyone away. The fight kind of stopped. The it started again on the dance floor.

‘I saw smoke where the fight was going on. There was a loud clap and there was a lot of smoke. Luckily we had an emergency exit.

‘We ran outside through the kitchen. There was panic and shouting.’

Sergei Vinogradov, 45, said: ‘We got a lot of people out the window. And then I choked on smoke. I felt I was going to fall down, and I climbed out, too’.

He said music was playing, people were dancing and suddenly there was a flash and the plastic ceiling burst into flames. People panicked and ran towards the only unblocked exit. 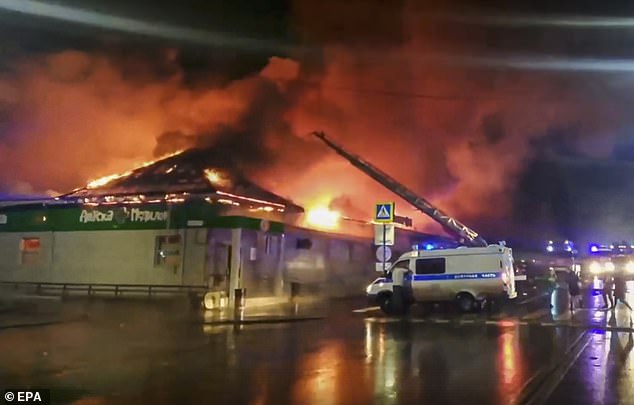 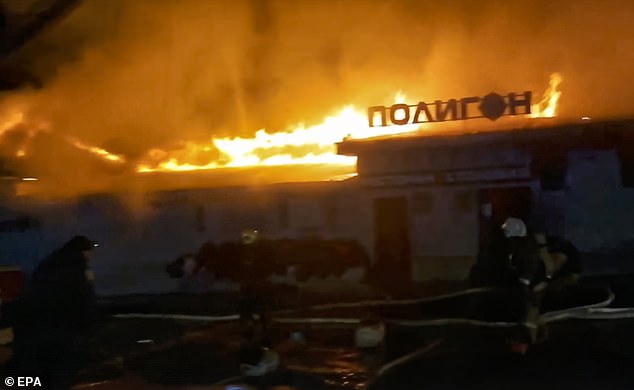 Sergei and his friends broke a window and began dragging people out. He suffered burns on his back and hands.

Local emergency services said the blaze had spread out over 3,500 square meters.

On its website, Poligon says it acts as an evening and night-time ‘place for recreation and entertainment’.

By day, it is a typical Russian ‘stolovaya’ – a casual restaurant serving traditional food.

It says it is housed in a ‘distribution centre’ and is popular with traffic police.

State television showed images of dozens of emergency workers fighting a huge fire that had engulfed the single-storey building.

The sign ‘Poligon’ was visible amid the flames raging on its roof.

One fire fighter told regional state television that it took 50 people to extinguish the fire and that they had used 20 fire engines.

He said the fire was especially difficult to put out because of the risk of the building collapsing.

Kostroma, a city on the Volga river of around 230,000 people, is one of Russia’s oldest cities and is famous for its medieval architecture and monasteries.