by
in Neighborhood Watch
0

Voters say they see disparities in education when it comes to resources and role models. 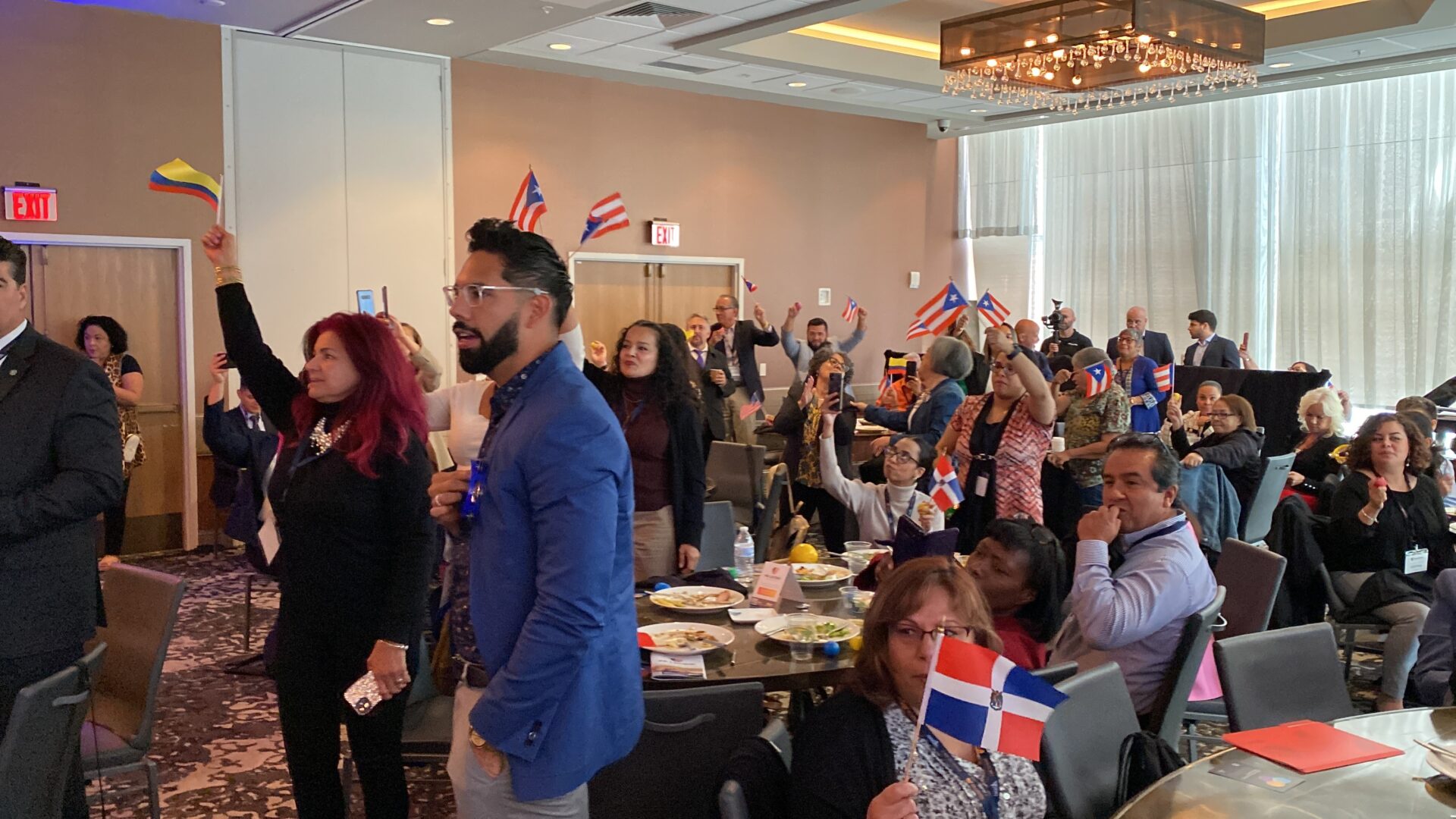 Attendees of the PA Latino Convention wave flags of their country or region of origin during a cultural celebration.

Editor’s note: This story is part of WITF’s pledge to put you, the voter, first in our election coverage – by engaging with you about issues important to your community and shining a light on them.

When it comes to politics, Juan Maldonado said he would like to see a few things change.

He ticks off a list — the U-S political system is too divided, the two-party system is limited and policies need to be more considerate toward what immigrants bring to the table.

“Can I have one more if you don’t mind,” Maldonado asked in a hallway in Allentown’s Renaissance Hotel. “I’m passionate over it because I’m living it, my daughter is living it….is the incredible amount of student debt that is currently in the United States.”

The average student loan debt of borrowers across the country is more than 36-thousand dollars, according to the Education Data Initiative.

“Why spend billions or trillions of dollars on armaments or any other thing like that,” Maldonado said. “When you can put just a drop, just a drop of that in education for small rural schools.”

Maldonado is a senior community relations consultant for Capital BlueCross. He was among the throngs of Latino experts in business, health and community outreach from across the commonwealth to convene at the PA Latino Convention held in Allentown in late September. 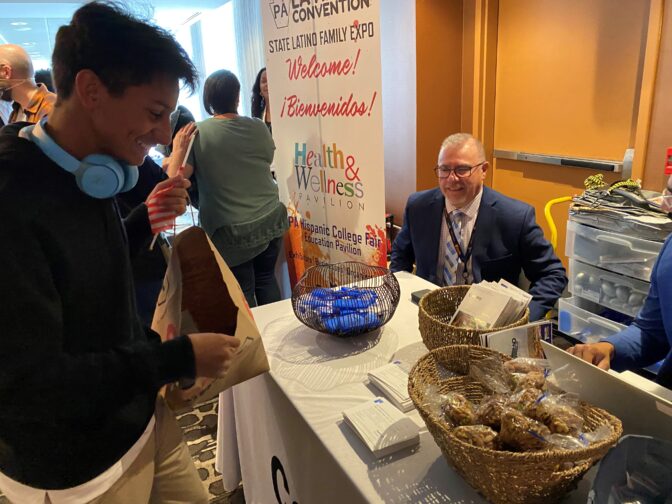 Juan Maldonado speaks with an Allentown-area student who visited the PA Latino Convention.

The annual event is headed by Norman Bristol Colon, the chief diversity officer for the Pennsylvania Department of Community and Economic Development. It promotes civic engagement, networking among organizations and progress in the commonwealth’s Latino community.

Maldonado has lived in Millersburg, Dauphin County, for nearly 40 years, after immigrating from Ecuador as a foreign exchange student. He said he knows families who have pulled their children out of the district because of a lack of programs and opportunities

“At the end of the day,  we’re talking about kids, they all have the service, they all deserve to have the same opportunities,” Maldonado said.

Niceiry Marizan is a broadcast journalism student at Penn State.

She said she would like more resources and opportunities for inner city school districts, like her alma mater, the Allentown School District.

Marizan said she saw a stark difference in how she and fellow members of the swim team would reuse warm-up suits — while more wealthy school districts, like Parkland School District, had top-notch gear.

“So, something as minor as our warm-up jackets where we had to pay for them, or just reuse them every year seeing the kids coming in and wearing these big parkas that we’ve looked up and are like $500,” Marizan said.

To her, the disparity extends to how other schools offer more extracurriculars and opportunities, such as driving classes. 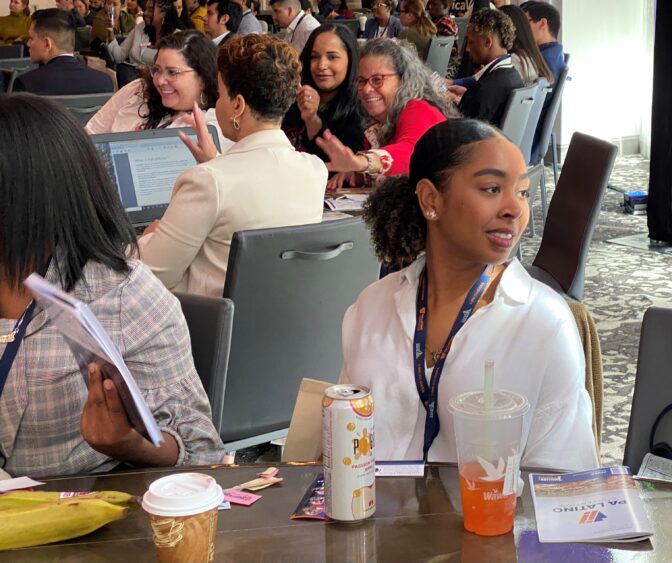 “I feel like it kind of just keeps the ball rolling for poverty,” Marizan said. “Because once you’re in a community and you don’t have those resources, it’s very hard to reach out and try to get out.”

The state budget funds about 38 percent of public school costs, significantly lower than the national average of states funding 47 percent of the price tag, according to the Education Data Initiative.

The rest is covered by property taxes, which are set and voted on by each district’s school board.

School funding is a perennial issue for taxpayers around the commonwealth. Taxpayers often turn out in large crowds to push districts to hold the line on property levies.

The Democratic candidate for governor,Josh Shapiro, wants to maintain the Wolf Administration’s level of spending for education, while also adding overall increases in funds.

The Pennsylvania State Education Association has issued a warning about that proposal.

The union for nearly 190,000 educators said it would cut public school funding by one-third, cut half of the jobs in schools and double class sizes for teachers.

Suburban districts that surround city schools are seeing an increase in immigrant and Latino students. 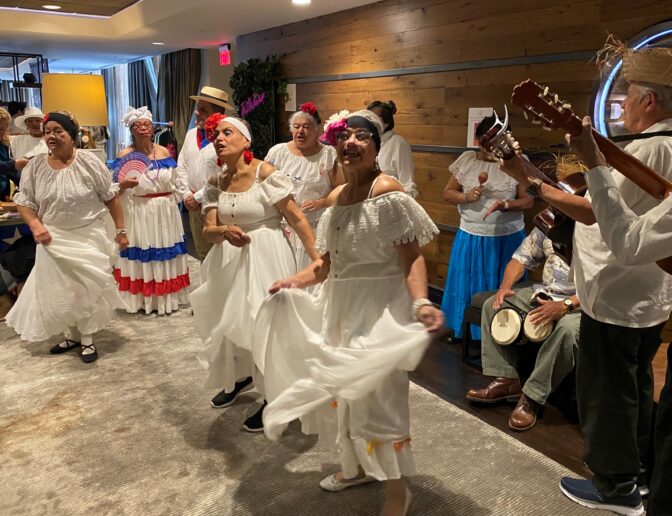 A band performs traditional Puerto Rican music in the Sala de Mi Abuela, or My Grandmother’s Living Room, section of the PA Latino Convention. The space was meant to honor tradition and elders of the community.

And while other Latino students are enrolled in the school, she said it lacks an important resource: diversity among its educators.

“I went to the open house and I couldn’t see a professor or a teacher, or one staff … maybe he wasn’t there and maybe they do have one…but I couldn’t see one who wasn’t white,” De Vargas said.

As a Black Latino, she notes there isn’t really anyone in school her son can identify with.

Half of all schools in Pennsylvania have no teachers of color and 38 percent have all white teachers, according to state data.

In 2020, Parkland reported having one percent of teachers who were Black. The rest were white.

“Maybe he doesn’t have anyone who he can relate to and that, for me, that’s a big issue,” De Vargas said.

Latino parents like De Vargas say they want equity, not only in funding, but in who helps shape the leaders of tomorrow.

Anthony Orozco is a part of the “Report for America” program — a national service effort that places journalists in newsrooms across the country to report on under-covered topics and communities.