by Corruption By Cops
in Defund The Police
0 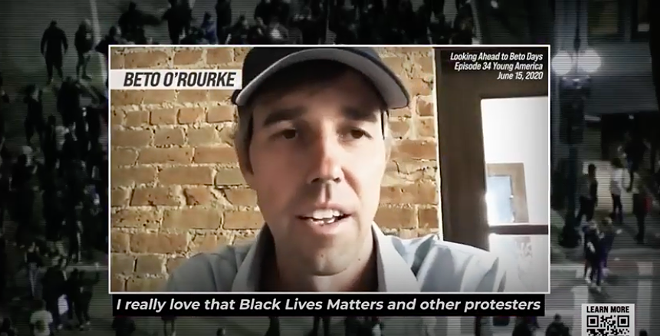 A new ad from Gov. Greg Abbott’s reelection campaign splices video to put words in the mouth of his rival.

Gov. Greg Abbott’s reelection campaign is airing TV spots that cut up and reassemble comments by opponent Beto O’Rourke to make it sound like the Democrat issued a wide-ranging approval of “defunding police forces.”

The Republican incumbent’s new ad, which began airing Tuesday, includes an excerpt from O’Rourke’s 2020 appearance on the Young America podcast in which he discussed Black Lives Matter and police reform.

In the unedited clip, the former El Paso congressman says he supports shifting funds for “line items that have overmilitarized our police” into programs that focus on crime prevention. He stops short of saying law-enforcement agencies should be defunded.

However, Abbott’s ad hacks more than 50 words from O’Rourke’s statement. Then it tacks on words from a separate sentence, making it appear that the candidate gave a sweeping endorsement of slashing police budgets.

The 30-second ad intersperses video of O’Rourke with footage of violent crimes and masked protesters. It also flashes the bold yellow words “Defund, dismantle the police” onscreen as a dramatic voiceover claims the Democrat “stands with groups that support defunding the police.”

Here’s an actual transcript of O’Rourke’s comments. The words in bold were the ones cut up and reassembled by the Abbott campaign.

“So, I really love that Black Lives Matters [sic] and other protesters have put this front and center, to defund, you know, these line items that have overmilitarized our police, and instead invest that money in the human capital of your community, make sure that you have the services, the help, the support, the health care necessary to be well and not require police intervention. And then also in some necessary cases, completely dismantling those police forces and rebuilding them.”

Abbott’s press office referred questions about the ad to officials with the governor’s campaign. Campaign officials were unavailable for comment.

In an emailed statement, O’Rourke campaign spokesperson said the Democrat has repeatedly voiced his opposition to cutting law-enforcement budgets, adding that he voted to increase police funding as a member of the El Paso City Council and as a congressman.

“Greg Abbott is trying to distract Texans from the fact that violent crime in the state is up across the board on his watch as the rates for bringing violent criminals to justice have plummeted since he took office,”  Evans added. “Homicides alone have increased by more than 50% since he’s been governor — TWICE the nationwide rate.”

Abbott’s new TV spot recycles a portion of a similarly manipulated clip that the Republican’s campaign used in an October attack ad against O’Rourke. A CNN report at the time described that ad as “deceptive” due to its “especially egregious” edits. The clip included three separate instances in which O’Rourke’s interview was cut and reassembled to put words into his mouth.

Stay on top of San Antonio news and views. Sign up for our Weekly Headlines Newsletter.