ASTANA – The Mazhilis, the lower house of the Kazakh Parliament, endorsed a bill providing amnesty to some participants in the January unrest at an Oct. 19 session, reported the Mazhilis press service. 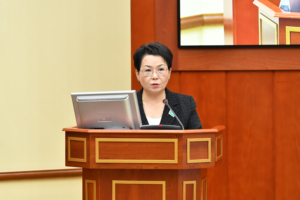 Member of the Committee on Legislation and Judicial and Legal Reform Gulnara Bizhanova presenting the bill on anmesty at the Mazhilis session. Photo credit: Mazhilis press service.

According to member of the Mazhilis committee on legislation, judicial and legal reform Gulnara Bizhanova, who presented the bill, the amnesty will apply only to crimes committed from Jan. 4 to Jan. 7 as part of the mass riots.

She noted that if the convict has less than a year left to serve when the law enters into force, this sentence will be reduced altogether. At the same time, those who committed terrorist acts, masterminds of the riots, and persons who committed torture can not be amnestied.

Deputy Prosecutor General Asset Chindaliyev explained that of 49 detained law enforcement officers, only one would be granted amnesty. The rest will be held accountable for torture and abuse of power.