Here’s the next part of Pressenza’s two-part interview with political prisoner Leila M. de Lima – former senator, justice secretary, and chairperson of the Commission on Human Rights – conducted by journalist Perfecto Caparas. De Lima discusses challenges to the rule of law in view of the country’s political dynamics.

“The Duterte Administration showed us the amount of destruction that a criminal syndicate such as the Davao mafia can do to a country and its government once it captures the powers of the Executive.” 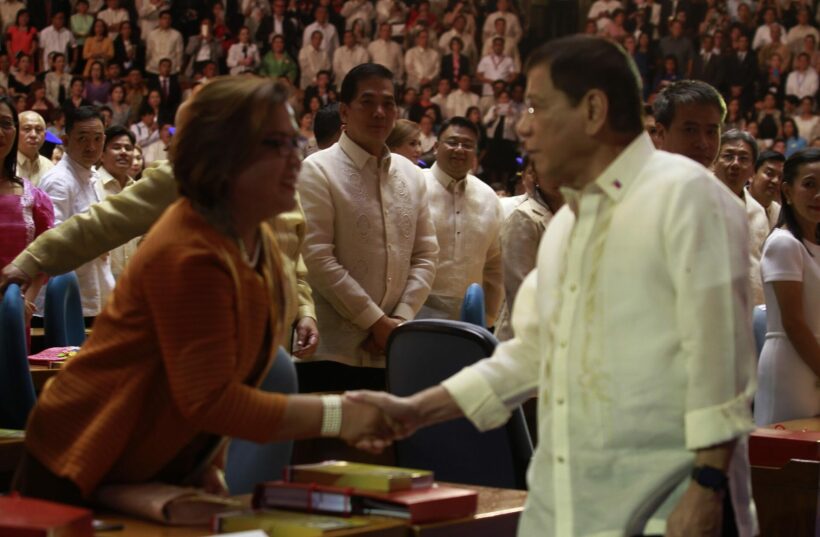 Perfecto Caparas (PC): What insights have you gained from your experience of arrest and prolonged detention with respect to the country’s political governance, culture and dynamics?

Leila de Lima (LDL): The Philippines is still a weak state. Regardless of the reforms in government we undertook during the Aquino Administration to strengthen national institutions such as the criminal justice system, it turned out that these were not enough because they were just wiped out in a single stroke once an authoritarian president took power. The Office of the President under the 1987 Constitution is still too powerful as to be able to easily coopt and undermine supposedly co-equal branches of government, i.e., Congress and the judiciary. Whoever becomes president can have almost absolute power, if he wants to, especially if he has no qualms in violating the law and his oath of office or committing crimes such as manufacturing evidence to imprison political enemies and even murder.

The Duterte Administration showed us the amount of destruction that a criminal syndicate such as the Davao mafia can do to a country and its government once it captures the powers of the Executive. They had been in power for six years and now we are seeing the consequences of the culture of corruption and criminality that the criminal Duterte government has propagated in these six years. Under the Marcos Jr. Administration they are still clinging to power through the network of Duterte appointees in the Philippine National Police (PNP) and other crucial government offices, and in the process they are in fact undermining the Marcos government.

PC: What specific weaknesses and characteristics of the nation’s political governance, dynamics and culture did your own experience reveal?

LDL: Our whole political system cannot withstand a criminal and authoritarian president. Once a president is elected, all power centers of the elite such as Congress, local government officials, the judiciary, mass media, and the business community gravitate towards it, especially if that president employs threats and coercion, as Duterte has done with politicians and businessmen. Under Duterte, only the Catholic Church was able to withstand his cooptation. It was therefore also easy for Duterte to implement his murderous drug war without consequences to himself and his accomplices.

Public support for Duterte’s drug war also shows the kind of values Filipinos have. Filipinos clearly prioritize personal security over the rule of law, so long as they are not the ones victimized by the PNP and vigilante death squads in the drug war. They are impatient towards protracted and painstaking legal solutions to criminality, even if this means letting a criminal himself provide a shortcut to the legal system by conducting a campaign of summary executions. To many Filipinos, justice also meant the swift elimination of criminal elements, regardless of the judicial process of determining who the criminal elements are. At the end of his term, Duterte remained popular and still got high grades for peace and order on account of the elimination of suspected criminal elements in urban communities. However, the cost of this ersatz justice system to the communities themselves is still to be accounted for in the future, as relatives of the victims still cope with the violence visited upon their homes and families.

Duterte taught Filipinos that the rule of law does not mean anything and that the Philippines is better off under a dictator willing to do unspeakable crimes “for the good of the majority”. I would not be surprised if up to now, a lot of Filipinos still agree with Duterte in what this country needs, and absolutely do not believe in the rule of law as something that is indispensable to good governance in the Philippines.

PC: How do you characterize the public reaction or response, if any, to your arrest and imprisonment?

LDL: In a cynical way, I have to give credit to Duterte for the way he staged my demolition. By the time he was finished, I have been completely destroyed and demonized in the eyes of the public. He started with the farcical telenovela investigation in Congress where he paraded his witnesses who were mostly convicted criminals or coopted public officials. This kind of televised real-life drama appealed to the public. This culminated in my arrest and imprisonment. By that time, my public ratings plummeted to a low of 10%, translated to about 5 million Filipinos still believing in my integrity and my record as a public official. This was reflected as late as in the 2022 Elections where I was able to get only 7 million votes, compared to more than 14 million votes I garnered in the 2016 elections. I needed more than twice the number of votes I got in the 2022 elections to win a Senate seat again. So my rough estimate is that after Duterte’s demolition job, I lost half of my supporters who most likely believed Duterte’s lies about me or doubted my innocence. I never regained these numbers even after my acquittal in one case and the retraction of material witnesses before the 2022 elections.

“Duterte and other misogynistic politicians resorted to shameless slut shaming.”

PC: What does this public reaction or response reflect and show?

LDL: It is not enough to have a good public record. A politician in the Philippines must first and foremost always wage a popularity battle in order to neutralize any demolition project against him or her. But faced with the full power of the president dedicated to one’s political assassination, I just don’t know if anyone could have survived what I was subjected to with his or her popularity and public trust ratings still intact.

In my case, the degree and manner of demolition was a first in Philippine history, led and orchestrated by no less than two branches of government, the executive and Congress. The entire government machinery was used against me. I was vilified in public hearings both in the House of Representatives and the Senate. Almost every day, the President himself made it a point to attack me in his press appearances and ambush interviews. Duterte and other misogynistic politicians resorted to shameless slut shaming. When I was arrested, I could not even find a remedy from the judiciary, with the Supreme Court (voting 9-6) deciding that the bogus charges filed against me were valid. I was basically helpless to counter the might and power that Duterte wielded as President and as an autocrat. Social media was inundated by vicious hate comments about me. On top of this, there was also mainstream media who joined in sensationalizing accusations against me.

In the end, what reverberated with the public was my guilt in a trial by publicity rather than the terrible summary execution of drug suspects that happened every single day. The public believed that I was a drug lord (I was labeled “mother of drug lords,” “Bilibid drug trade queen,” “leading narco-politician in the country”), despite the utter lack of evidence and the preposterousness of the charges, but could not care less if Duterte was a mass murderer, despite his own public admissions of ordering the killings. This is a very troubling realization of how the Filipino consciousness works, that it is just all right for a president to imprison and murder without trial, and that due process does not matter, as long as it is in the name of getting rid of criminals even before they are declared guilty by a court of law. Rule of law still has a long and hard way to go in the Philippines, maybe decades more.