US will support sending ‘multinational rapid action force’ to Haiti

by CorruptionByCops
in Community Patrol
0 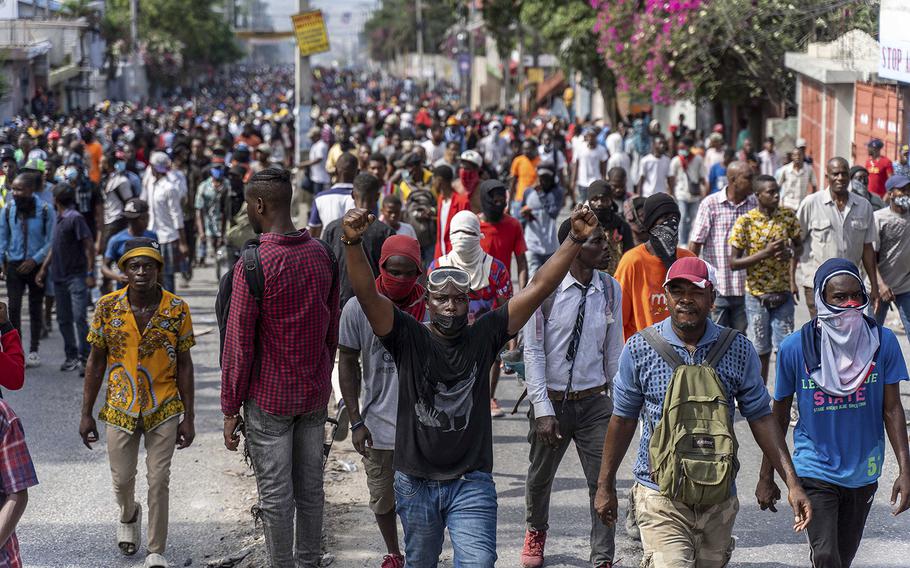 Demonstrators fill the streets during a protest to demand the resignation of Prime Minister Ariel Henry, in the Petion-Ville area of Port-au-Prince, Haiti, on Oct. 3, 2022. (Richard Pierrin/AFP/Getty Images/TNS)

(Tribune News Service) — The United States has drafted a United Nations Security Council resolution that will encourage the “immediate deployment of a multinational rapid action force” to Haiti to address the nation’s worst security and health crisis in decades, according to a copy of the resolution obtained by McClatchy and the Miami Herald.

The draft resolution, confirmed by multiple U.S. and U.N. officials, comes in response to a call by U.N. Secretary General António Guterres last week for the establishment of a rapid reaction force to assist the Haitian National Police. Over the past four weeks, powerful armed gangs have all but sent the country into anarchy, blockading the country’s largest fuel terminals and cutting off its critical roadways.

It is the first public indication so far that the Biden administration is willing to participate in a military force in Haiti — although the resolution does not specify what role various nations would play.

A U.S. source familiar with the drafting of the resolution said that the multilateral force would not be under the supervision of the U.N. or assembled under Chapter VII of the U.N. Charter, which endorses the use of force for the maintenance of peace.

The violence and lack of governance in Haiti has led to a shortage of potable water and a burgeoning cholera outbreak, alarming the international community and forcing the Biden administration — long reluctant to intervene in Haiti militarily — to acknowledge last week that the status quo has become untenable.

If the draft resolution remains unchanged, and the Security Council adopts it, the U.N. would encourage “the immediate deployment of a multinational rapid action force to support the (Haiti National Police) as recommended in the Secretary-General’s letter,” according to the draft.

It is still unclear whether China or Russia, two permanent members of the Security Council, will support the resolution. China has been critical in recent months of the international community’s approach to Haiti and has called for a stronger arms embargo on the Caribbean nation.

The United States is also seeking a U.N. mechanism that will levy international sanctions against Haiti’s gang leaders.

This week, the U.S sent an elite disaster assistance response team to Port-au-Prince, deployed a major Coast Guard vessel to patrol the Haitian coast and issued visa restrictions on prominent Haitians involved in the violence.

On Saturday, flights from both Canada and the U.S. are expected to land in at the Port-au-Prince airport carrying critical security assistance, including armed vehicles ordered by the Haitian police, according to two sources familiar with the matter.