Russia-Ukraine updates: US will not label Russia as state sponsor of terrorism | News | DW

by Corruption By Cops
in WatchDog
0

The US government is not planning to categorize Russia as a state sponsor of terrorism, National Security Council communications chief John Kirby said.

The announcement came a day after US President Joe Biden told a reporter that his administration was not planning to give Russia the designation, though he gave no further details.

“We believe that it’s just not the best and most efficient, most effective way to continue to hold Russia accountable,” Kirby told reporters.

He added that the designation could have negatively effected Ukraine’s position at the negotiating table if talks with Russia were to resume.

US currently lists four countries are state sponsors of terrorism: Syria, Iran, North Korea and Cuba, all of which are under corresponding US sanctions.

Here’s a look at some of the other major news stories from Russia’s war in Ukraine on September 6.

“We are playing with fire, and something very, very catastrophic could take place,” Rafael Grossi, head of the IAEA, warned the UN Security Council, days after leading an inspection visit to the Zaporizhzhia nuclear power plant.

According to Guterres, this would include “a commitment by Russian forces to withdraw all military personnel and equipment from that perimeter and a commitment by Ukrainian forces not to move into it.”

Ukrainian President Volodymyr Zelenskiy spoke with Britain’s new Prime Minister Liz Truss and invited her to visit Ukraine. He said it was her first call with a foreign leader.

“I became the 1st foreign leader to have a conversation with the newly elected PM @trussliz,” Zelenskyy wrote on Twitter.

“Thanked (British) people for the major defense & economic aid for (Ukraine). It’s important that (the UK) is ready to further strengthen it,” Zelenskyy added.

According to Downing Street, Truss accepted the invitation to visit Ukraine. She also reiterated the United Kingdom’s “steadfast support for Ukraine’s freedom and democracy.”

The European Commission has recommended that the Visa Facilitation Agreement with Russia be suspended.

The move was largely expected, and will now be passed onto the European Council for final approval.

“A country like Russia, waging a war of aggression, should not qualify for visa facilitations as long as it continues conducting its destructive foreign policy and military aggression towards Ukraine, demonstrating a complete disregard to the international rules-based order,” the Commission said in a statement.

“The suspension is in response to increased risks and threats to the Union’s security interests and the national security of the Member States as result of Russia’s military aggression against Ukraine.”

Suspending the deal would mean a more arduous process for visas for Russian nationals, but would include considerations for family members of EU citizens, journalists, dissidents and civil society representatives.

The increased hurdles they face would include a higher visa fee (€80 up from €35), processing times of up to 45 days, restrictions on multiple entry visas, and a requirement for more documents.

The visa deal first came into force in 2007, but ministers from EU member states last week agreed to put it on ice. The new arrangement falls well short of an outright ban on visas for Russians, which some EU states had called for.

According to the Commission, about 963,000 Russians held valid visas to the Schengen area.

Kharkiv regional Governor Oleh Synehubov said that three civilians were killed in two Russian strikes on the regional capital and on a village north of it.

Synehubov said that a Russian rocket attack had destroyed a residential building, killing a 73-year-old woman.

Two men were killed in shelling in the Kharkiv village of Zolochiv, which lies in between the regional capital and Ukraine’s border with Russia, according to the governor.

Synehubov said that a new rocket attack on Tuesday morning had nearly destroyed an apartment building in central Kharkiv. The city’s mayor, Ihor Terekhov, said that three people had been rescued from under the ruins of the building.

Ukraine’s General Staff in a Facebook post estimated the Russian military’s total losses since the start of the invasion in February at more than 50,000 soldiers.

The Ukrainian army claims to have destroyed over 2,000 tanks and nearly 4,500 armored vehicles, and to have shot down 236 airplanes and 207 helicopters.

The dpa news agency said it could not independently verify the data.

Britain’s defense ministry has given an estimate of 25,000 Russian losses, far short of the Ukrainian General Staff’s figures.

Moscow has not provided any information on casualties for many months.

Last Friday, pro-Russian separatists in the Donetsk region estimated their losses since late February at 2,900. 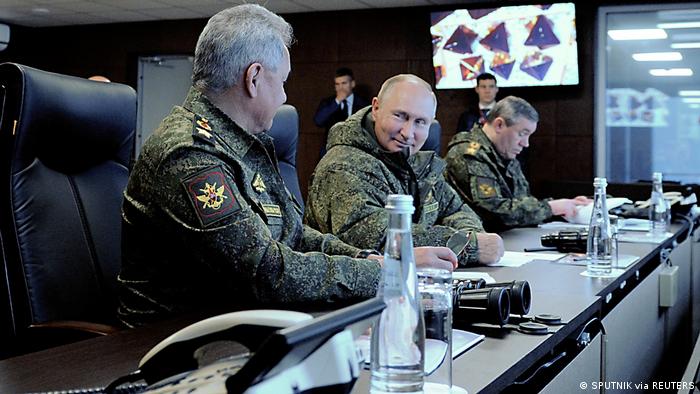 Troops from China, India and a number of other countries are participating in the drills, named “Vostok-2022” after the Russian word for “east.”

Moscow says the drills also involve military contingents and observers from Algeria, Laos, Mongolia, Nicaragua and Syria. Also involved are Belarus, which Moscow has used as a staging ground for its invasion of Ukraine, and a number of other former Soviet countries in Central Asia and the Caucasus.

The exercises are due to end on Wednesday, after which Putin will attend the Eastern Economic Forum in Vladivostok alongside Chinese top lawmaker Li Zhanshu.

More on the conflict in Ukraine

Russian statistics bureau Rosstat said the country’s GDP had fallen by just 0.4% in the first six months of 2022, as oil and gas revenues continue to shore up the country’s finances despite Western sanctions.

Former British Foreign Minister Liz Truss, who is set to take office as prime minister today, has pledged to increase British defense spending to at least 2-3% of GDP. Truss said that her first conversation with a world leader as PM will be with Ukrainian President Volodymyr Zelenskyy, underscoring Britain’s support for Kyiv.

Germany is set to extend the lifespans of two nuclear plants as Berlin tries to find alternatives to Russian gas.

What Responsibility Do Courts Bear for the Crisis at Rikers Island?