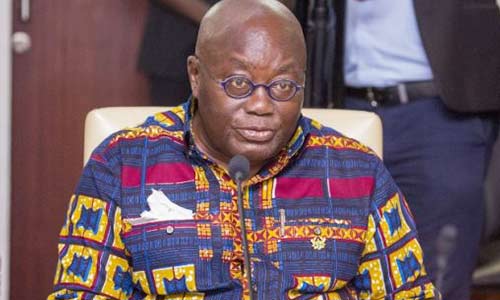 Ghana’s President Nana Akufo-Addo on Monday fired his junior finance minister over corruption allegations made in an upcoming documentary on illegal gold mining. The president has “terminated the appointment of the Minister of State at the Ministry of Finance, Mr Charles Boahen, with immediate effect,” he said in a statement.

The fallout from the expose by a well-known investigative journalist comes as the government is under pressure over a faltering economy and lawmakers push Akufo-Addo to fire Finance Minister Kenneth Ofori-Atta.

The presidency’s statement said Akufo-Addo’s decision came after “being made aware of the allegations” against Boahen in the documentary “Galamsey Economy,” which is scheduled to be released on Monday.

Akufo-Addo also referred the case to prosecutors for further investigation.

Teasers from the expose show Boahen in what the documentary claims are images of him trying to demand $200,000 from potential investors to give to the vice president to allow them to do business.

Galamsey is a local Ghanaian phrase referring to the illegal or unregulated, small-scale gold mining operations.

Boahen has not commented on the allegations made in the teasers.

But before the sacking was announced, Vice President Mahamudu Bawumia on Monday said he was not aware of any meeting in which Boahen had used his name to “peddle influence and collect money from supposed investors.”

“If what the minister is alleged to have said is accurately captured in the video, then his position as a minister of state is untenable,” he wrote on Twitter.

“I will not allow anyone to use my name to engage in corrupt activities.”

The documentary was made by Anas Aremeyaw Anas, whose previous exposes led to a ban on the former Ghana FA president by FIFA and sanctioning of over 50 referees across Africa.

He had also investigated the country’s judiciary leading to the dismissal of over 30 superior and lower court judges in Ghana over bribes to drop cases.

The documentary will have a public screening at the Accra International Conference Centre for two days.

Akufo-Addo has been under increasing pressure after recently opening negotiations with the International Monetary Fund over a potential $3 billion loan to help shore up the country’s economy.

Last month, he appealed to Ghanaians to support his efforts to manage the “crisis” as inflation has hit 40 per cent and the national currency, the cedi, has dropped sharply.

Lawmakers are investigating Finance Minister Ofori-Atta over economic mismanagement and other allegations, though he is leading the talks with the IMF team over the loan deal. AFP

The book with the title, ‘The Employment Law Handbook’ By Jamiu Akolade

The book features amongst other things; over 300 pages of employment law knowledge and resources, over 60 legal opinions, together with over 150 Judicial authorities on frequently asked questions on labour and employment law.