by Corruption By Cops
in Judicial Watch
0 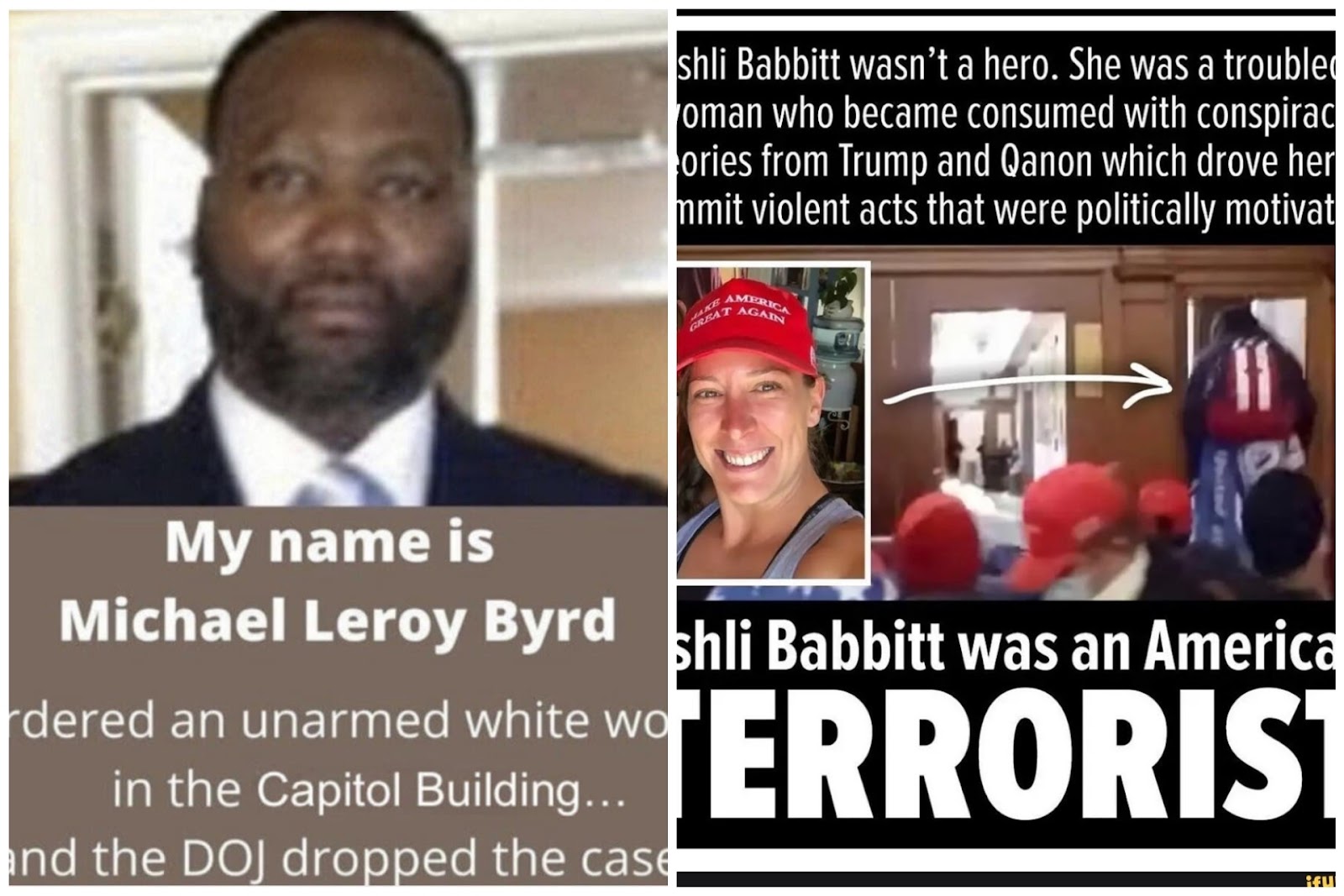 Judicial Watch announced that it received productions of new records totaling 102 pages from the Department of Justice (DOJ) related to the shooting of January 6 protestor Ashli Babbitt that include a memo recommending “that the United States Attorney’s Office for the District of Columbia decline for criminal prosecution the fatal shooting of Ashli McEntee [Babbitt],” also noting that the shooter, U.S. Capitol Police Lt. Michael Byrd, “did not create a police report or documents” related to the shooting of Babbitt.

The documents also reveal that in the press release announcing the decision not to prosecute Byrd for the killing of Babbitt, the DOJ replaced the words “group” and “crowd” with the word “mob” several times.

The unarmed Babbitt was shot and killed as she climbed through a broken interior window in the United States Capitol. She was a 14-year Air Force veteran. The identity of the shooter was kept secret by Congress, the Justice Department, and DC police for eight months until Byrd went public to try to defend his killing of Babbitt.

The lawsuit was filed in the U.S. District Court for the District of Columbia after the Executive Office for United States Attorneys, the Civil Rights Division, and the Federal Bureau of Investigation (all components of the Justice Department) failed to provide the records responsive to Judicial Watch’s April 14, 2021, and May 20, 2021, Freedom of Information Act (FOIA) requests for records related to the death of Babbitt (Judicial Watch v. U.S. Department of Justice (No. 1:21-cv-02462).

The “Overview and Recommendation” section reads as follows:

This memorandum recommends that the United States Attorney’s Office for the District of Columbia decline for criminal prosecution the fatal shooting of Ashli McEntee.

This declination is based on a review of law enforcement and civilian eyewitness accounts, physical evidence, recorded radio communications, cell phone footage, MPD reports, forensic reports, and the autopsy report for Ms. McEntee. After a thorough review of the facts and circumstances in this case, there is insufficient evidence to prove beyond a reasonable doubt that Lieutenant Byrd violated Ms. McEntee’s civil rights by willfully using more force than was reasonably necessary, or was not acting in self-defense or the defense of others.

All three officers had their service pistols drawn, pointed them in the direction of the barricaded entry doors, and repeatedly instructed the ‘mob’ to get back. The ‘mob’ of demonstrators ignored the officers’ commands and continued to break the glass on the doors in their attempt to breach the Speakers Lobby. Suddenly, Ashli McEntee began to crawl through one of the doors where the glass was already broken out. As Ms. McEntee was climbing through the door, Lieutenant Byrd stepped forward from his tactical position towards Ms. McEntee and fired one round from his service pistol striking Ms. McEntee in her left shoulder, just below her clavicle. Ms. McEntee then fell back from the doorway and onto the floor.

Rep Paul wrote: “The January 6th Political Prisoners are still rotting in jail with limited access to basic necessities. The civil rights abuses being inflicted on them reflects a third world political system.

US’ justification of F-16 to Pakistan shallow and dangerous: Report

US’ justification of F-16 to Pakistan shallow and dangerous: Report