by
in Police Abuse
0

A California high school football team has defied a ban on flying a pro-police flag at games following complaints the emblem is racist.

Despite the explicit ban, students from Saugus High School’s Centurions football team in Santa Clarita in LA County have now gone ahead displaying the flag at a Friday night game against Golden Valley, which saw them lose 31-13.

The flag is intended to show support for law enforcement and was barred from being displayed on the field earlier last month after some described it as ‘uncomfortable and unwelcome’.

The flag is a black and white Stars-and-Stripes, complete with a single blue line to denote support for cops. 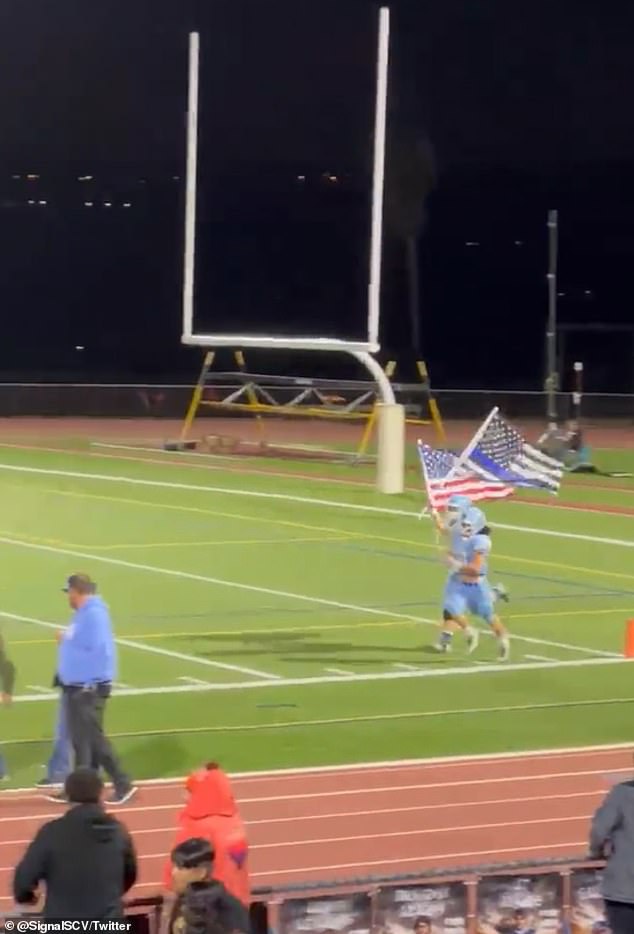 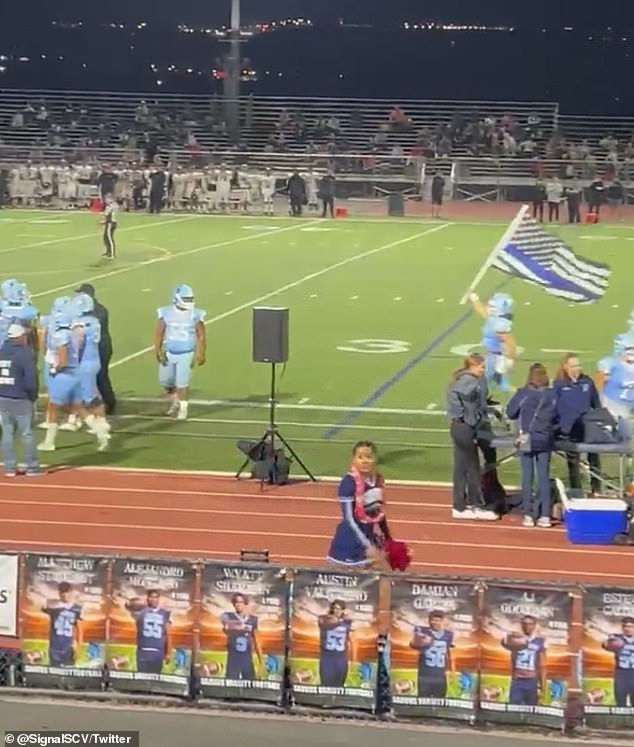 On Friday night, Saugus High School football played against Golden Valley and took to the field with one member of the team carrying the Thin Blue Line flag 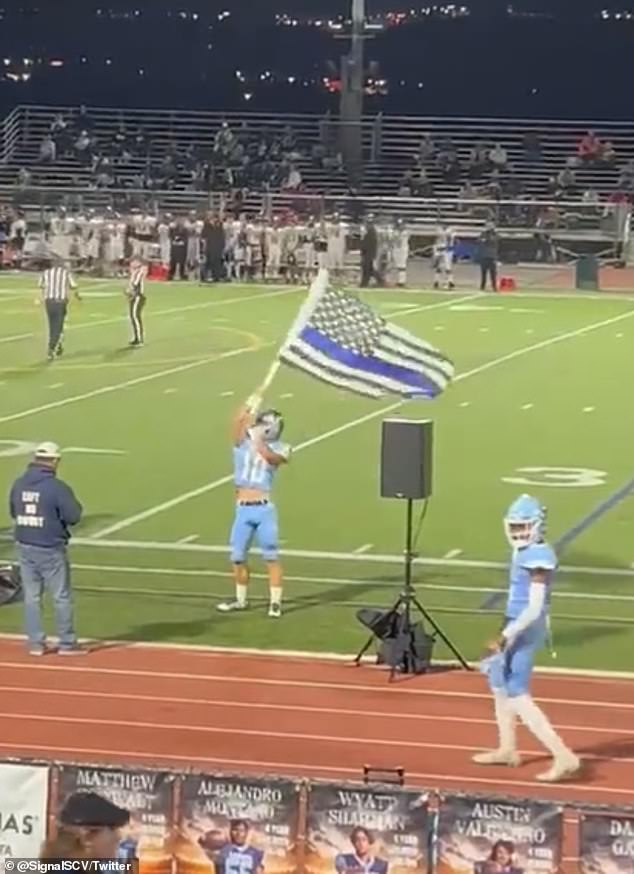 ‘Given that some individuals have expressed concern that they interpret the Thin Blue Line flag to be divisive, it occurred to (the coach) that it’s possible that some players on the team might not be entirely enthusiastic about a symbol that is being used to represent the entire team,’ Kuhlman said who noted the decision to stop flying the flag was made by football coach Jason Bornn.

‘In deference to his commitment to inclusivity, kindness and respect (just loving people), and because the team never voted as a unit to carry this banner, Coach decided to discontinue this practice,’ Kuhlman continued.

Before the ban was put in place, one local resident, Duncan Mandel, raged against the presence of the flag in a Facebook post.

‘There is absolutely no reason for this image to be carried out onto the field by players or used on cheer blocks. Get loud,’ he said. ‘What message are we sending to our kids if we sit back and allow this divisiveness to continue. Do something! This is simply not a First Amendment issue.’

The local NAACP chapter responded to the banning by saying in part that the flag is ‘a tool utilized by those determined to stoke division, injustice, and exclusion.’ 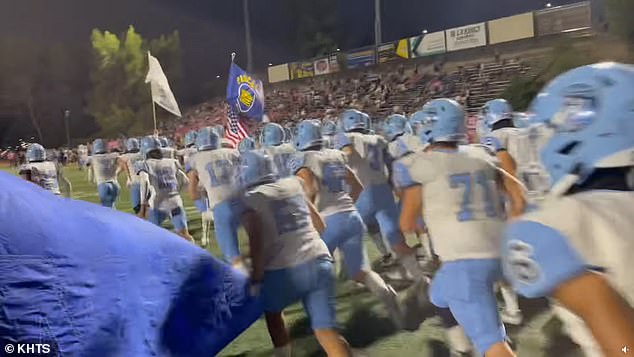 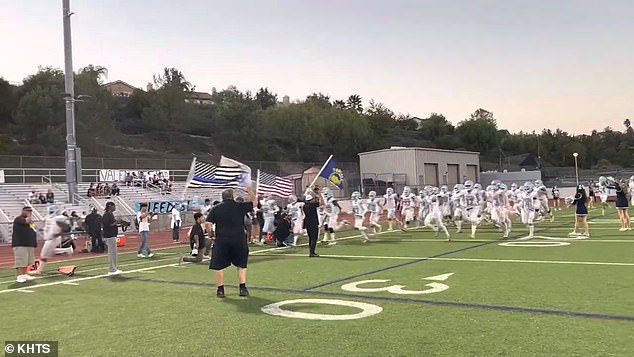 Prior to the banning, one local resident, Duncan Mandel, raged against the presence of the flag in a Facebook post. The thin blue line flag can be seen being carried by the team at a previous game 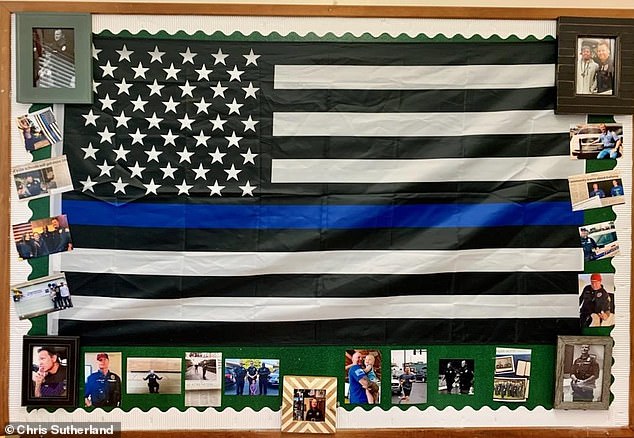 The thin blue line flag, pictured on display at a Washington school, mimics the Stars-and-Stripes, but is black and white – save for a single blue line intended to show support for the police 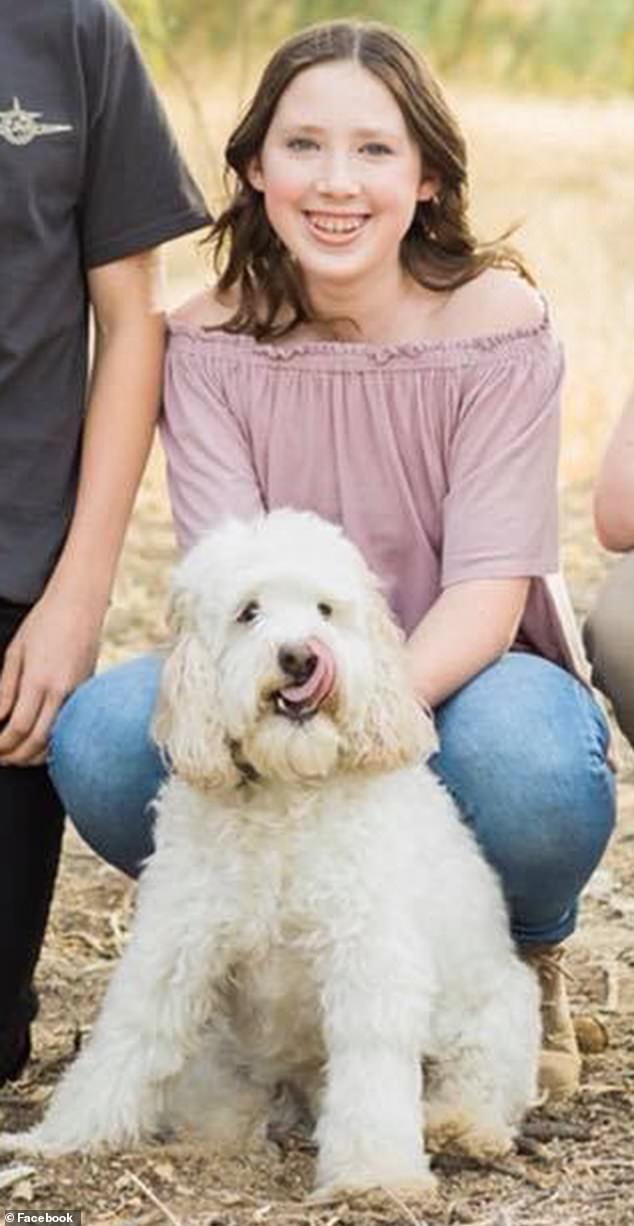 Gracie Anne Muehlberger, 16, was shot and killed by gunman Nathaniel Berhow in November 2019 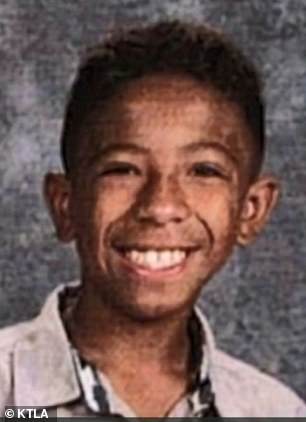 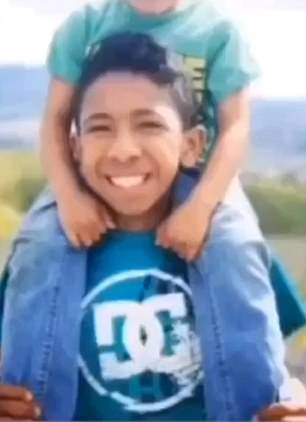 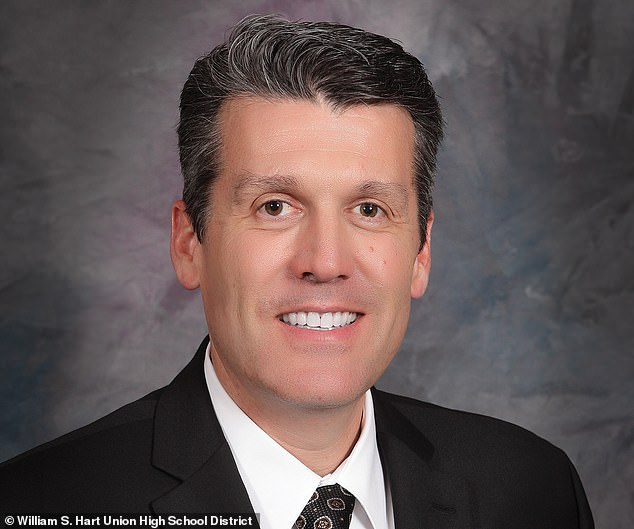 The flag has a special meaning to the Saugus community after a mass shooting at the school in November 2019, which saw two young students murdered, and the 16-year-old gunman shoot himself dead. Off-duty cops were among the first to arrive on the scene, and were credited with saving wounded victims from dying.

Survivors of the shooting are now seniors at Saugus.

On November 14, 2019, 16-year-old Nathaniel Tennosuke Berhow pulled out a .45-caliber semi-automatic pistol out of his backpack and opened fire in the school’s quad, hitting  five classmates before turning the gun on himself.

In the space of 16 seconds, Berhow had unloaded the entire magazine of his .45 semi-automatic rifle.

Authorities say more people would have died if three off-duty police officers who happened to be dropping off their children at the school at the time hadn’t been there.

They rushed into the building when they heard gunfire and, once the shooting had stopped, gave first aid to some of those injured. 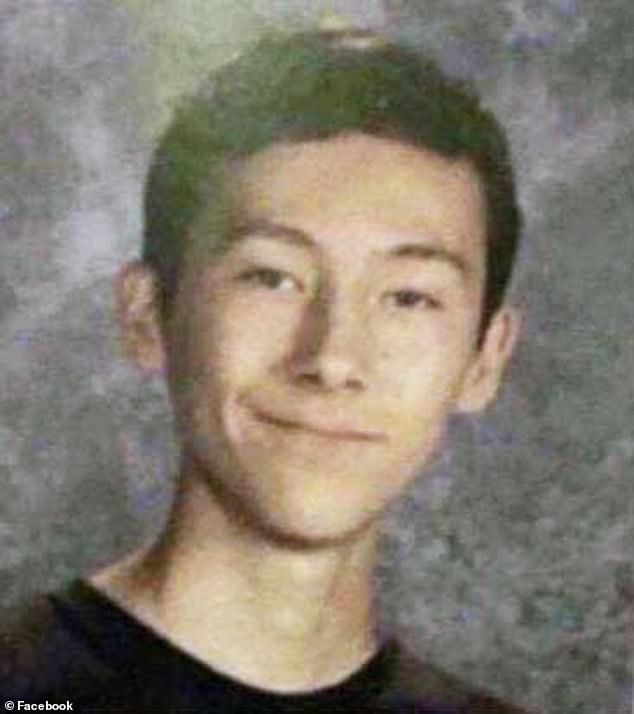 On November 14, 2018, Nathaniel Tennosuke Berhow pulled a gun out of his backpack and opened fire in the quad of Saugus High School in Santa Clarita

According to the website for Flags of Valor, a company that sells thin blue line merchandise, ‘The Thin Blue Line emblem was established to symbolize all law enforcement personnel similar to the Red Cross symbol representing all medical personnel.’

It has become controversial in the wake of George Floyd’s murder and ensuing Black Lives Matter protests and riots throughout the summer of 2020. That saw many call for police departments to be defunded or even abolished, with the divisive issue continuing to roil American politics.

The flag was usually carried onto the field by 16-year-old Wyatt Hawk. His mother, Lexi, told KHTS: ‘Saying that we’re disrespecting other people is ridiculous . . . Nobody discussed it. It was not a roundtable discussion, therefore without a discussion, there is no democracy.’

Hawk said she personally knows members of law enforcement who ran into the school on the day of the 2019 shooting.

Another police supporter, Jessica Suarez, told the station: ‘I think it’s especially symbolic for the Saugus Football seniors who were on campus in 2019 on the day of the (Saugus High School) shooting.’ She added that her husband works in law enforcement.

Suarez went on: ‘They’re banning it because they’re calling it a symbol of the Blue Lives Matter Movement. It was co-opted by extremists who took the symbol and used it in a negative light… that’s not what this thin blue line means to us.’

Many in the crowd wore T-shirts that read: ‘THE BLUE HAD OUR BACKS NOW WE BACK YOURS,’ the Los Angeles Daily News reported.

Retired police officer Todd Cataldi, whose son plays on the team, told the newspaper: ‘These kids went through a lot when they were freshmen with the school shooting, and there are several kids on the team whose parents work in law enforcement and are first responders and want to show their support for them.’

A pro-Black Lives Matter protester who went to the game tweeted about his experience and said that he was going there to ‘protest bootlickers.’

The protester, Ryan, said he planned to protest from the bleachers but changed his mind when he saw the groundswell of support.

‘I decided it would be safer to hang around out front and protest at the gate,’ he tweeted.

During the game, Ryan said he faced abuse from ‘young and old alike.’ At one stage, a local prospect congresswoman, Rebecca Hindman, asked to take a picture with him.

Finally, Ryan said that toward the end of the game, a school official told him that it would it safer if he left early.

‘Realizing that having 200+ riled up sports fans file past me might be bad for both my health and my car’s, I decided to leave about 30 minutes before the game ended. (Saugus won, yay!),’ he said.

A protester named Ryan, who goes by Social Justice Warboss, tweeted about his experiences at the game 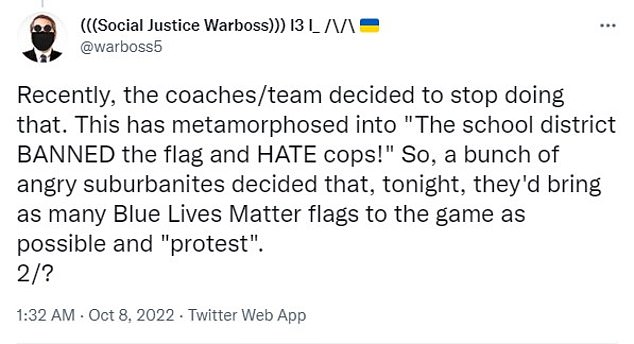 Ryan said he faced abuse from ‘young and old alike’ 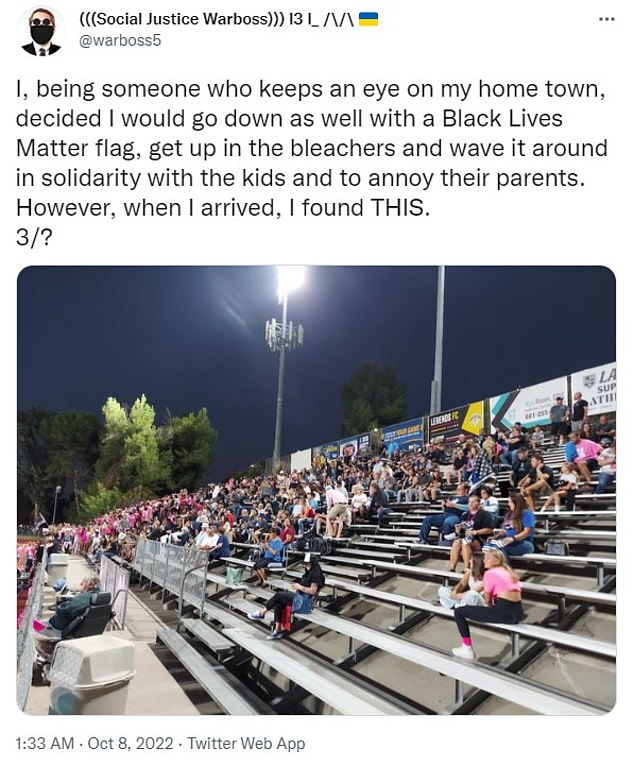 However, after seeing the sheer amount of support that the thin blue line flag had, he decided to protest outside

In an interview, Ryan said: ‘The thin blue line as a symbol has existed for a long time’

He also said: ‘I brought this flag out to show support for the students that didn’t want to fly that flag before the game. I’ve gotta imagine, looking at that stadium tonight… I gotta imagine that the students feel pretty alone’

Despite receiving verbal abuse from some people, Ryan said that he left early and made it home safely

In response to the banning of the flag, the local chapter of the NAACP said in a statement: ‘When Saugus High School announced that the thin blue line flag will no longer be allowed on the field at football games, some members of the community responded with outrage.’

The press release continued: ‘But for many in the black community the flag has been, and continues to be a tool utilized by those determined to stoke division, injustice, and exclusion.’

The group said: ‘[In 2014] the thin blue line flag was popularized by Andrew Jacob, a white affluent college student, who found [Black Lives Matter protests] distasteful. It has been embraced by hate groups across the country.’

The statement concluded: ‘If you want to honor police officers, use symbols that aren’t associated with injustice, hatred and divisiveness.’

A woman wearing a ski mask was one of two protesters outside of the game. She held up a sign that read: ‘Go home Nazis.’ 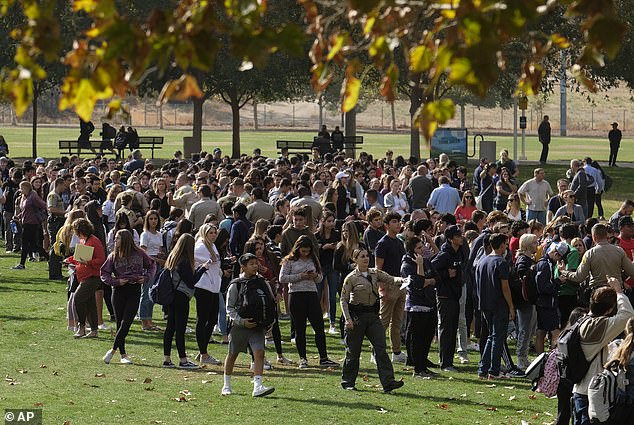 Saugus High School students are seen above at a park in Santa Clarita, California, waiting to be reunited with their parents after the shooting on November 14, 2019 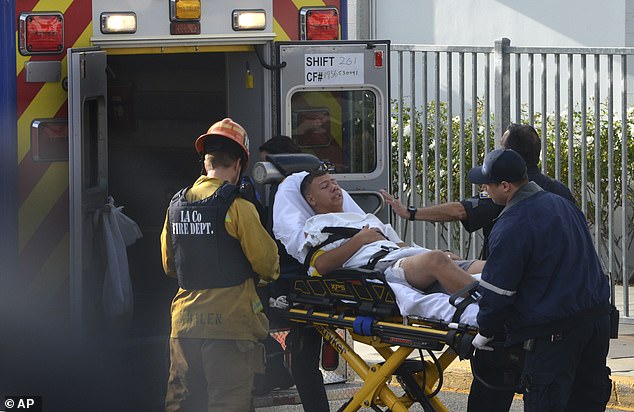 The unnamed woman told KHTS: ‘One of the things that people don’t really understand is that police in the United States kill on average three people every single day, about 1,100 people a year.’

She continued: ‘We’re the only country that does that. Why? We can do this differently.’

Ryan, the same protester who tweeted about his experiences, carrying a Black Lives Matter flag, told KHTS: ‘The thin blue line as a symbol has existed for a long time.’

He also said: ‘But that flag has only really come into prominence since the Black Lives Matter movement started. It was a response. That flag is a response to this flag.’

Ryan added: ‘I brought this flag out to show support for the students that didn’t want to fly that flag before the game. I’ve gotta imagine, looking at that stadium tonight… I gotta imagine that the students feel pretty alone.’

In the stands during the team’s game on Friday, dozens of fans could be seen carrying thin blue line flags and wearing insignia.

He told KTLA: ‘It’s not about backing something and saying everything else is bad. It’s just about saying hey, we support the blue line. That’s it. It was that simple. It turned into something it shouldn’t have turned into.’