Aragalaya has a message; don’t shoot the messengers 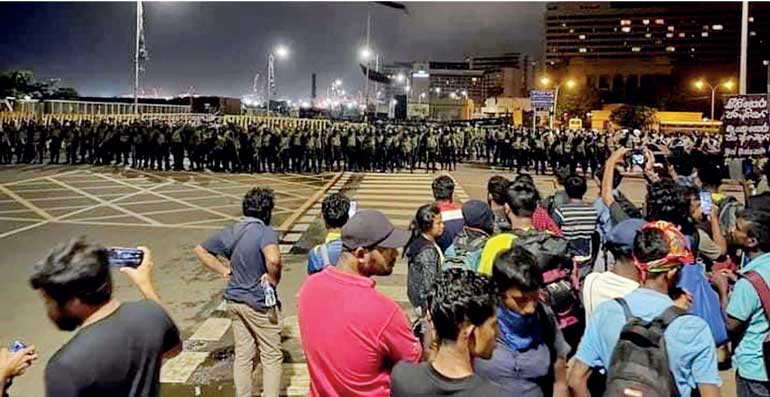 Persecuting people associated with the Aragalaya is not the answer. Listening to their message, and the message of many who are very likely a silent majority, is the answer

religious denominations veering more towards orthodoxy and fundamentalism or whether it has been the other way about. There is confusion as to where the Egg is and where the Chicken is.

During a meeting in Anuradhapura recently, President Wickremesinghe, deliberately, or inadvertently and/or innocently touched on a core issue that is at the heart of the dissatisfaction people have with the political system and what it has produced over the years. He mentioned that the original spring (or ulpotha) that gave rise to subsequent political parties, (author’s remark, Sinhala Buddhist oriented parties) was the United National Party (UNP).

He mentioned late S.W.R.D. Bandaranaike who was in the UNP, and who subsequently formed the Sri Lanka Freedom Party (SLFP), a section of which has since evolved into the Sri Lanka Podu Jana Party (SLPP) under the leadership of the Rajapaksa brothers, Chamal, Mahinda, Basil, and Gotabaya, and whose father late D.A. Rajapaksa had broken away from the UNP along with S.W.R.D. Bandaranaike to form the SLFP, and the Samagi Jana Balavegaya (SJB), a breakaway from the UNP, had their origins in the UNP. In making these observations, President Wickremesinghe extolled all these parties to come together now in the country’s hour of need as they all had a common source of origin.

While all political parties must come together at this hour of need to forge a future together from the ashes of the economic debacle that the country is in, President Wickremesinghe must realise that such a coming together cannot be and must not be for a return to the status quo and to perpetuate the system that has existed since independence, as it is this system that has brought about the economic bankruptcy of the country.

The system that political leaders and political parties established and managed since independence had some successes, but many failures. The weaknesses outweighed the strengths. In hindsight, the country can see this and should learn lessons from past mistakes. The bankruptcy of the country in economic terms is a result of the system and those who the system produced and who then managed it. Policy flip flops, absence of strategic thinking and action, huge debt based investments without assessing costs and benefits and return on investments, systemic corruption at all levels of the society, absence of a coherent and consistent foreign policy, have all been inherent features of the political system that has failed the country. The reluctance and/or inability of political parties to get together to develop a governance policy for the next 12-18 months when the country is at the bottom of the pit is an indication of the dynamics of the political system. The next election and who acquires power is more important for the constituents of the system, than the interests of the country. This is the reality.

In this context, whatever other motives Aragalaya or some within it may have had and still have, the fundamental premise is the need to change the political system. And why? Simply, because it failed the country.

The spring or ulpotha that the UNP was, and all the rivers and rivulets that flowed from it no doubt would have had good intentions overall, but the stark fact is that they all failed. The present and coming generations do not see any light at the end of the tunnel. All they see is the system that failed them, making all possible attempts to resurrect itself.

Rather than arresting, detaining, and charging some who were associated with the Aragalaya, it would have been far more strategic and politically more prudent to have begun a discussion with the Aragalaya and encourage it to have discussions with the broader public rather than attempting to silence its voice. In saying this, there is not even a hint made that any violent action should be condoned and tolerated. However, some would view the use of the PTA, detention, and court action against protestors as nonphysical violence against them if one were to consider these means as part of the status quo, system wise.

The following excerpt from the Daily Mirror is quoted to support the contention that the system had failed. Quote “the list of creditors in the $81 billion economy ranges from Western sovereign bondholders, who together account for the largest $14 billion slice of debt, to bilateral players such as China, Japan, and India. Then there are the multilateral lenders – the Asian Development Bank and the World Bank. The country’s outstanding foreign debt is a staggering $51 billion, with some independent economists estimating that China’s lending to Sri Lanka from 2001 to 2021 amounted to nearly $9.95 billion. Sri Lanka had a foreign debt bill of $6.9 billion that it had to service in 2022 but defaulted in April after it ran out of foreign reserves, a first in the South Asian nation’s history.

“The country of 22 million currently has $300 million worth of usable foreign reserves, not enough to ensure a steady flow of food, fuel and pharmaceutical imports. The latest figures from the Department of Census and Statistics show that food inflation in July soared to 82.5% on the year” unquote. The country’s economic bankruptcy cannot be clearer than this. It is a country surviving on debt, and with almost no assets in the form of foreign exchange reserves to buy its essentials.

When mentioning systems, it is not only the political system that is the subject of the discussion. Many parts of the administrative system, the judicial system, the law enforcement system, the prison system judging by shocking and disgusting revelations made by a recently released high profile prisoner, are also in a state of dysfunction, with bribery and corruption permeating to these as they have to the political system.

Sinhala Buddhist hegemony has become even more evident and a stronger influence in the outcome of elections leading to who governs and who does not. There is increasing evidence of Muslim extremism from a Sri Lanka perspective, with more fundamentalist Wahabism taking hold in in the country and amongst Muslims. Christian church groups outside of the more traditional Catholic, Anglican and Methodist groups have spread and have become stronger. One needs to question whether strengthening of Sinhala Buddhist hegemony has been a consequence of other religious denominations veering more towards orthodoxy and fundamentalism or whether it has been the other way about. There is confusion as to where the Egg is and where the Chicken is.

The political system, and in a general sense, the politicians it has produced, one inextricably linked to the other, and the unquestioning attitude of voters, their expectation of maximum governmental interference in economic affairs of individuals and society, the opposite of a laissez-faire system, has contributed to short-term politics and who gets their vote in return for small handouts. The political literacy of the public, in a general sense, has been questionable as they have been averse to considering and accepting a middle ground economic model.

In this climate, and context, unless the politicians of today take the lead to metamorphose themselves and the system, and learn lessons from the likes of the Aragalaya, the system could well be replaced by something else which everyone may come to regret later. Persecuting people associated with the Aragalaya is not the answer. Listening to their message, and the message of many who are very likely a silent majority, is the answer.

The purpose in mentioning these dysfunctional state of affairs is to pose the question where Sri Lanka is with human rights, moral and ethical conduct in all aspects of governance despite its 74-year post-independence history, and the much publicised Sinhala Buddhist majority heritage.

A new Aragalaya, comprising of as many non-partisan political bodies and personnel functioning as opinion facilitators amongst the public, should lead the task of exploring a new political system for the country. While some are calling for elections, it will not address the critical need to change the governance system that has brought the country to where it is now. Without a change to the system, it will continue to produce the kind of politicians who have governed the country so far and brought it to where it is today. The political literacy of the public too needs advancement, and this should be led and facilitated by a new breed of politicians as well as by religious and society leaders.

The same machine will produce identical sausages. The machine must be changed to produce different sausages. A crude analogy, but a logical one.

A new system that focuses on long term planning carried out by experts in economic, agricultural, energy, health, education and social areas, which provides equal rights to everyone, including women, which recognises the ethnic and religious diversity of the country without any one segment of the society labelled as more equal than others, which ensures all citizens are equal before the law and which ensures that adherence with the law of the land entertains no compromise, which has strong punitive measures against bribery and corruption, and which provides for a political governance council drawn from all levels of the society and which devolves administrative governance to peripheral levels, are some features that a future governance model could consider.

One does not need to be an Einstein to say that it would be foolish to expect different results if one continues to do the same thing.